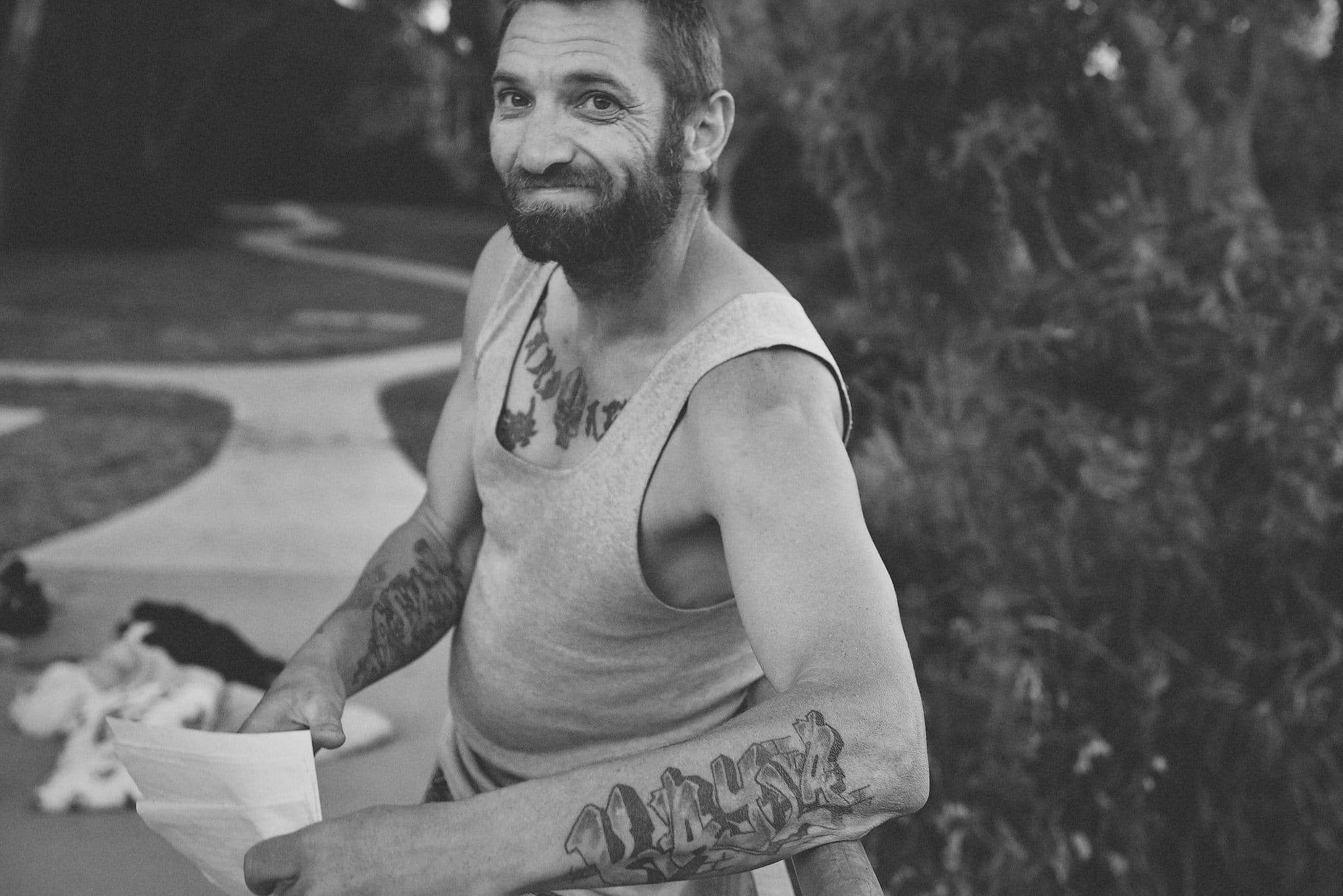 “How’d you go, catch any fish down there?” I asked Adam while looking down over Bateau Bay Beach right after saying goodbye to Brendan and Alycia following their engagement shoot.

“Nah mate, not a thing but it was a perfect day” Adam replied cheerily and with a big smile as he limped/hopped over to the carpark railing, happy to leave packing the car for a bit of a chat.

We got talking and I learnt Adam had just been released from the maximum security prison at Silverwater. Well, that was an opening for me to fire question after question with genuine intrigue… is it really like they make out in the movies and on TV, were you scared, how was the food, is there much free time, are there gangs and a hierarchy, how long were you in for…

It’s the boredom that gets you. There’s just too much time doing nothing.

The guards are there to do a job, they’re not our mates which I get, you know, we’re the prisoners. Most are pretty good but some are terrible. The good guys would pass our meals to us but some of the kitchen hands, they’re mostly Indians working in there, they’ll put our food tray on the floor and kick it over to us like we’re dogs. I’m not racist but that sort of thing isn’t good.

I spent a lot of time writing. Poetry mainly. I love creating rhymes. Not like a rapper, I hate that shit. I like poetry and rhymes. I’ll read you one if you like? I have over 50 so far, I want to make a book. I’ve spoken to a couple of people and there shouldn’t be a reason why I can’t do this. I’ve had good and bad jobs, made money legally and illegally but I want to give this a go.

I was in for 7 months and I have another hearing coming up for another part of my charge. I might have to go back but I hope not. It’s not a nice place.

We’re up at 9am for a feed then out into the yard for 2 hours.

A concrete yard the size of a small house but a triangle shape – you know, in case some shit is happening and they have to funnel us in. There’s a couple of benches, some gym equipment and we pretty much walk up and down for 2 hours. Back in for lunch, back out in the yard for 2 more hours, dinner, then in your cell for the night.

The cell was alright, I had my own TV and I could read and write and draw but there’s a lot of time to yourself or with your cell mate.

Most guys in there are alright. If you don’t go in there trying to show how tough you are, because there is always someone tougher, you’ll be fine. You don’t ask what someone is in for, it’s kind of an unwritten rule. I did meet the two brothers who killed that guy by setting him on fire and putting him in a suitcase. They were ok, never caused me any trouble and they seem like normal blokes. You don’t really know the full story and I’m not saying they’re good people but they never did anything wrong by me. My cell mate was a big dude! I walked in and thought, shit, this isn’t going to be good but he was a top guy. Jumped right off his bunk, helped make my bed and we started chatting right away. He was a good guy. A tough big dude you wouldn’t mess with but a good guy.

Yeah, my leg got broken inside. Had to stand up for myself. We get $15 each week to buy some extra supplies and a few guys stood over me for my money. I said no, they said they’ll bash me for it and I said you’ll have to bash me to get it anyway. I punched the first guy in the mouth, then I got kicked by one and the other snapped my leg on the side of a toilet. Shit happens, I don’t complain, it’ll be right. They didn’t hassle me after that though. Nah, you don’t tell anyone about that stuff and never who did it, that’d be worse.

You can get anything you want in prison. If you came in I could make you a cup of coffee. We don’t have kettles or anything but the guys in there learn how to adapt and get creative. To boil water, we’ll roll up some tin-foil and shove it in the power point, another piece in the other socket of the power point and create an element. Hang that in the cup of water and it boils. You gotta be careful though, if you blow the fuse and the boys watching the footy lose the TV power, they’re not going to be happy and you’ll hear about it. I was always real careful with that stuff.

Smokes, oh yeah, for sure. We don’t have lighters but the guys will use the tin foil with some toilet paper between the two strips of foil and when you turn the power point on, bingo, fire.

Drugs… oh yeah, anything you can think of you can get in prison. First day I was there, a guy shows me a ball of ice the size of a golfball and asks if I want some. I said no, that’s what I’m in for, I’m not touching the stuff.

Guys are creating needles with someone else’s insulin syringe and creating their own needle with the inside of a pen, a small plastic bag and the tip of the insulin needle. They put their shit in the piece of pen, stick the needle in and press the plastic bag. It’s bullshit what these blokes will do.

I’ve got three kids and as much as I’ve loved spending the day with Katie, I would have loved to have had my kids here with me on this beach today. I miss them. It’s tough you know, the ex-wife and her family are saying how bad I am and planting those seeds with everyone. Yeah, I’ve done a few wrong things but I’m not a bad person and I love my kids. I think they know, they do know. Besides, I know I’ve changed, I’m not a bad person but when people know you’re an ex con, it’s tough. People get scared of you and I’m no tough guy. Yeah, I can look after myself but I don’t want trouble.

When I was inside, I didn’t have anything and I was happier than I’ve ever been while having nothing – that part was good. Out here, everyone wants more than their neighbour. I hear people complaining they don’t have this or that or they always want more. Just spending the day on the beach, in the sun, outside, having a fish and a chat, meeting you, it’s all good. It’s enough you know. 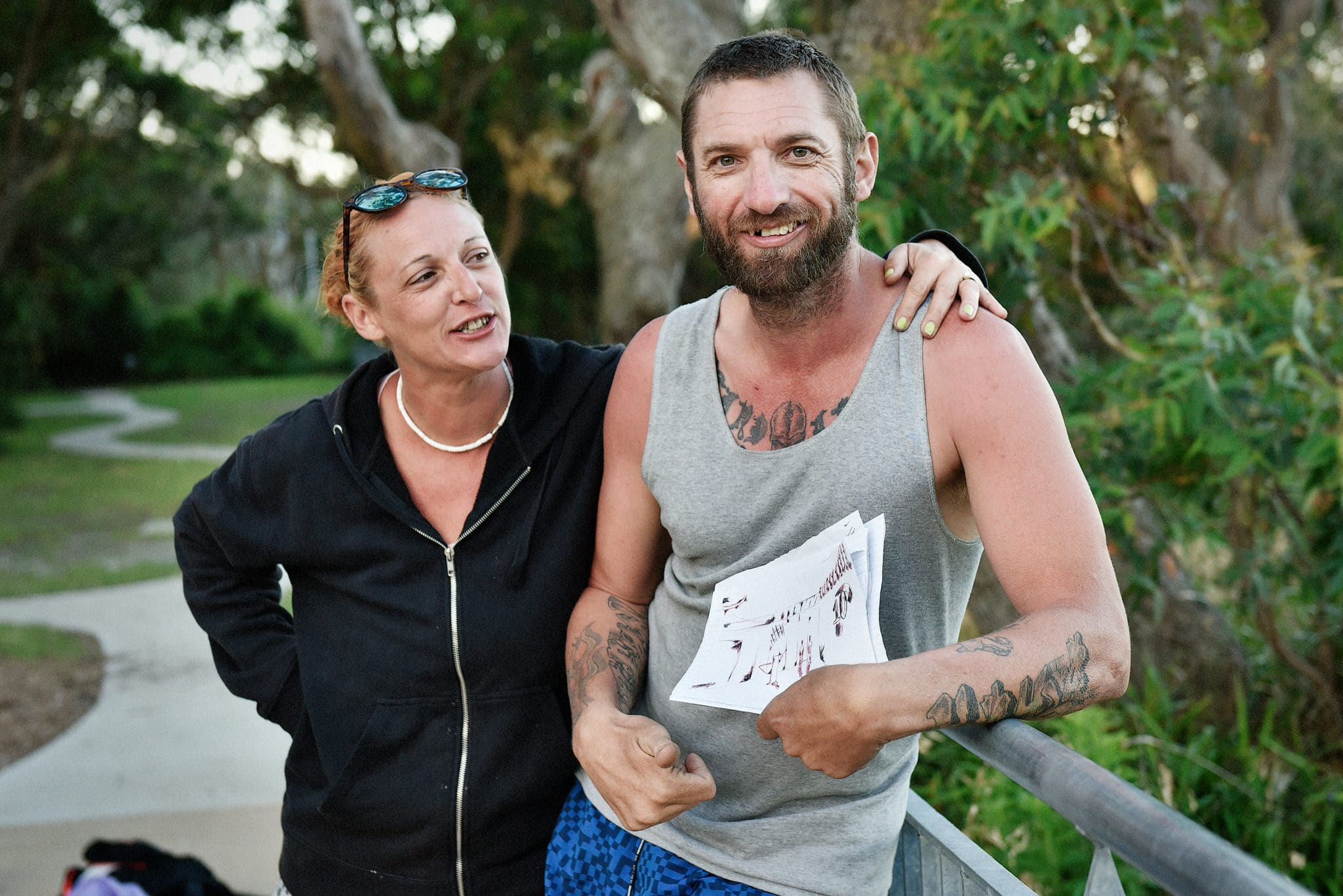 Katie and Adam with one of his drawing from prison. 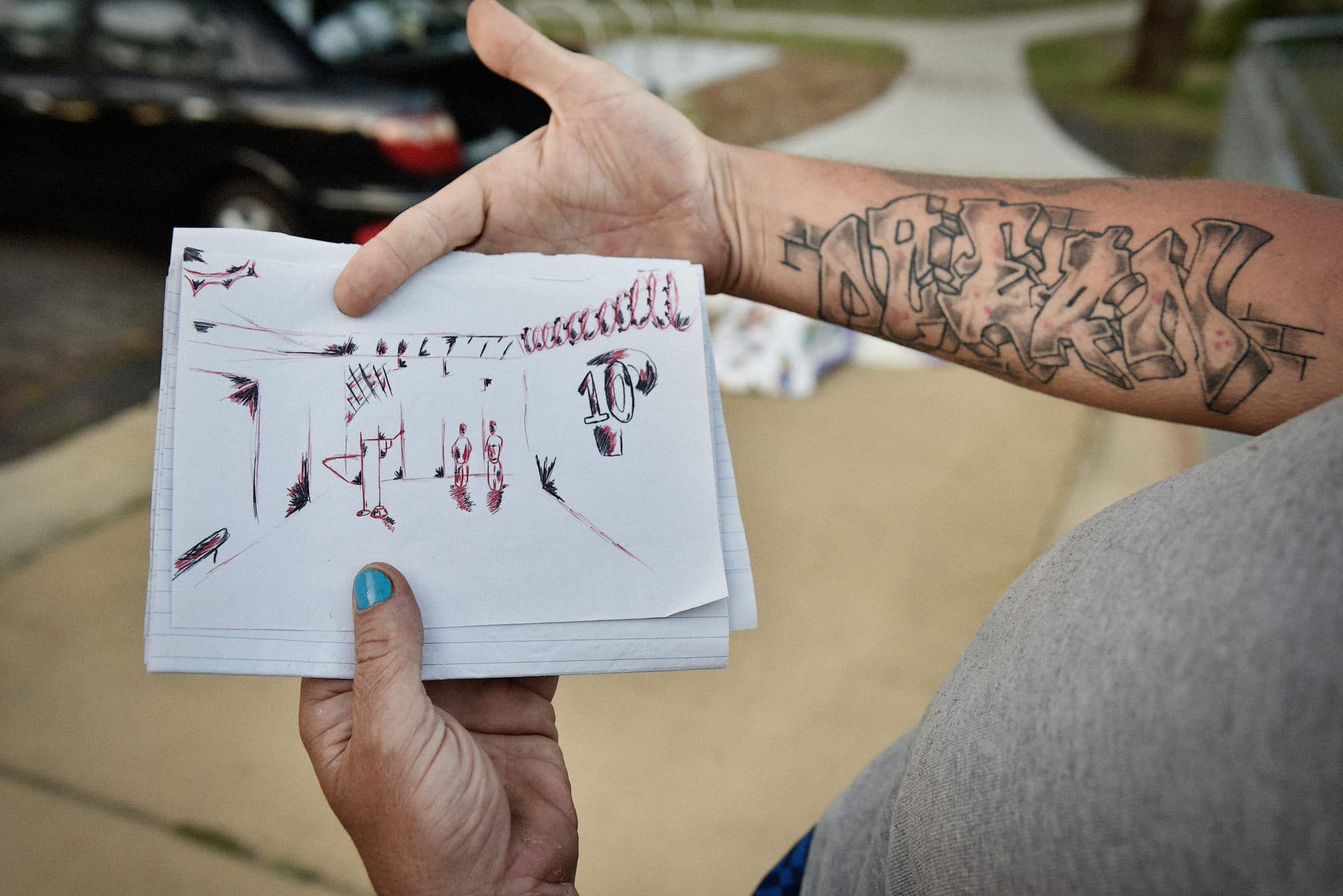 One of Adam’s drawings showing “Pod 10” where he was confined to inside prison. 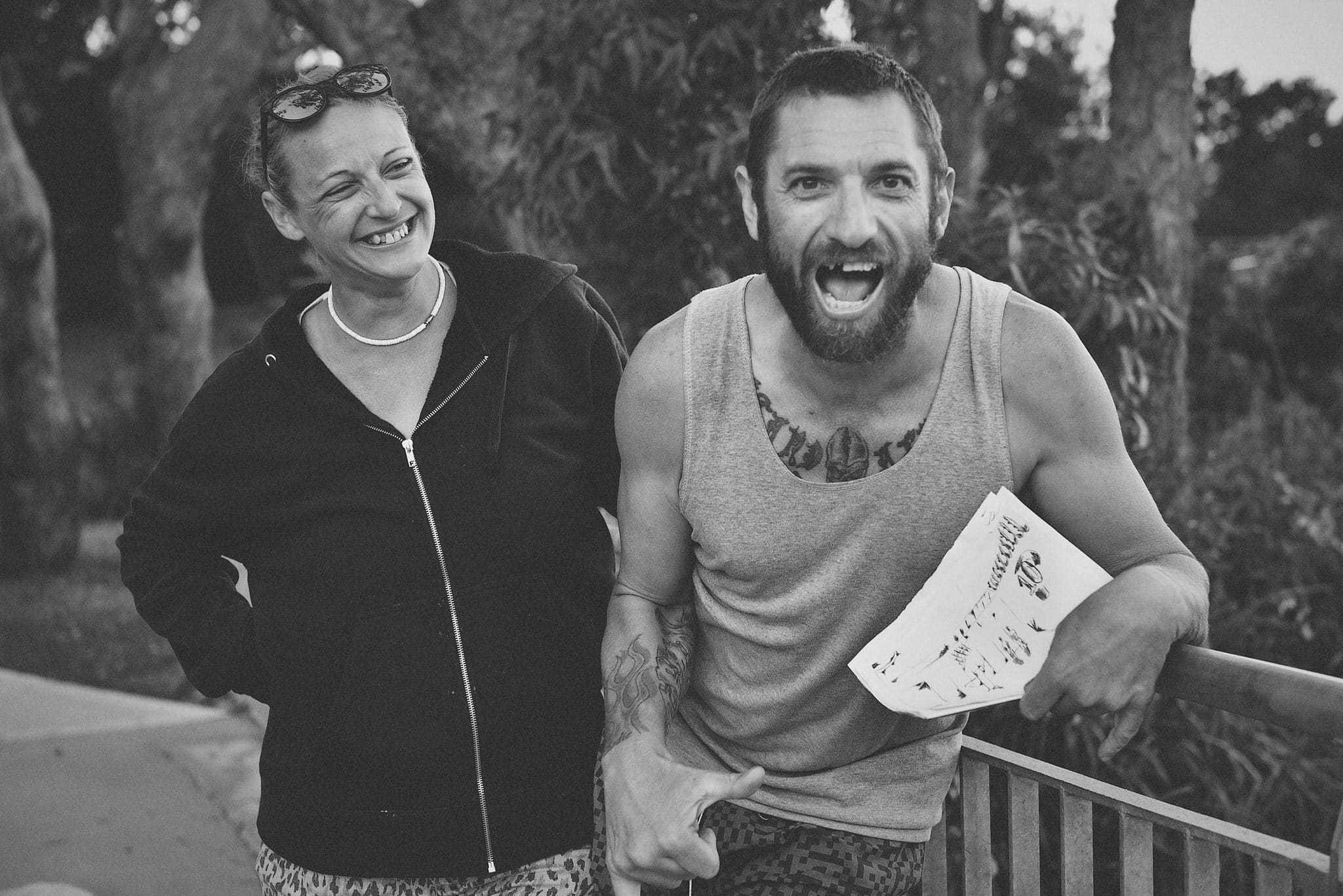 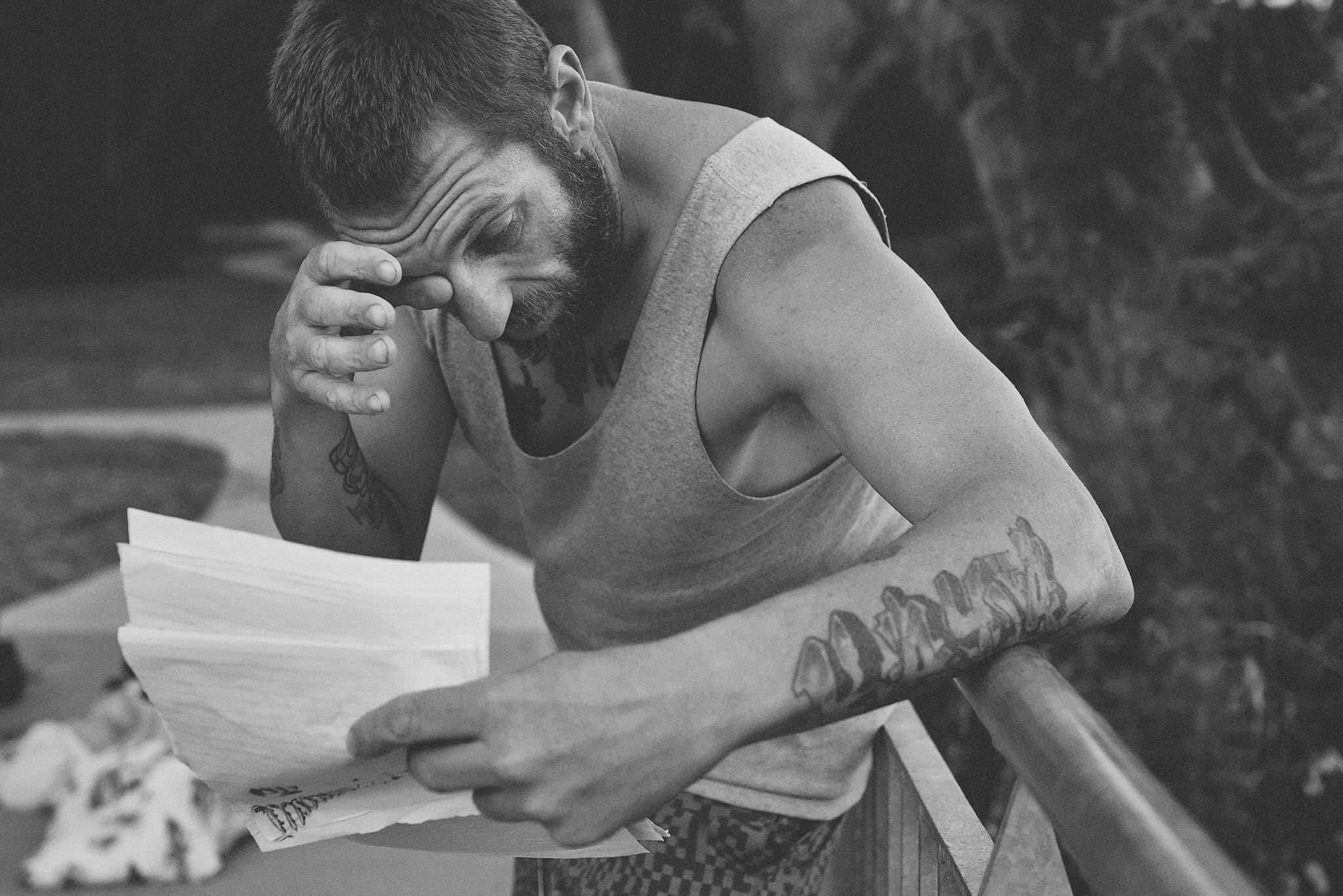 Adam was tearing up and getting emotional while reading one of his poems to me. His passion and gift for writing was a real treat to witness. The poem was witty, funny, sad and with a good message. And while reading it aloud, I witnessed Adam reliving the rollercoaster of emotions. 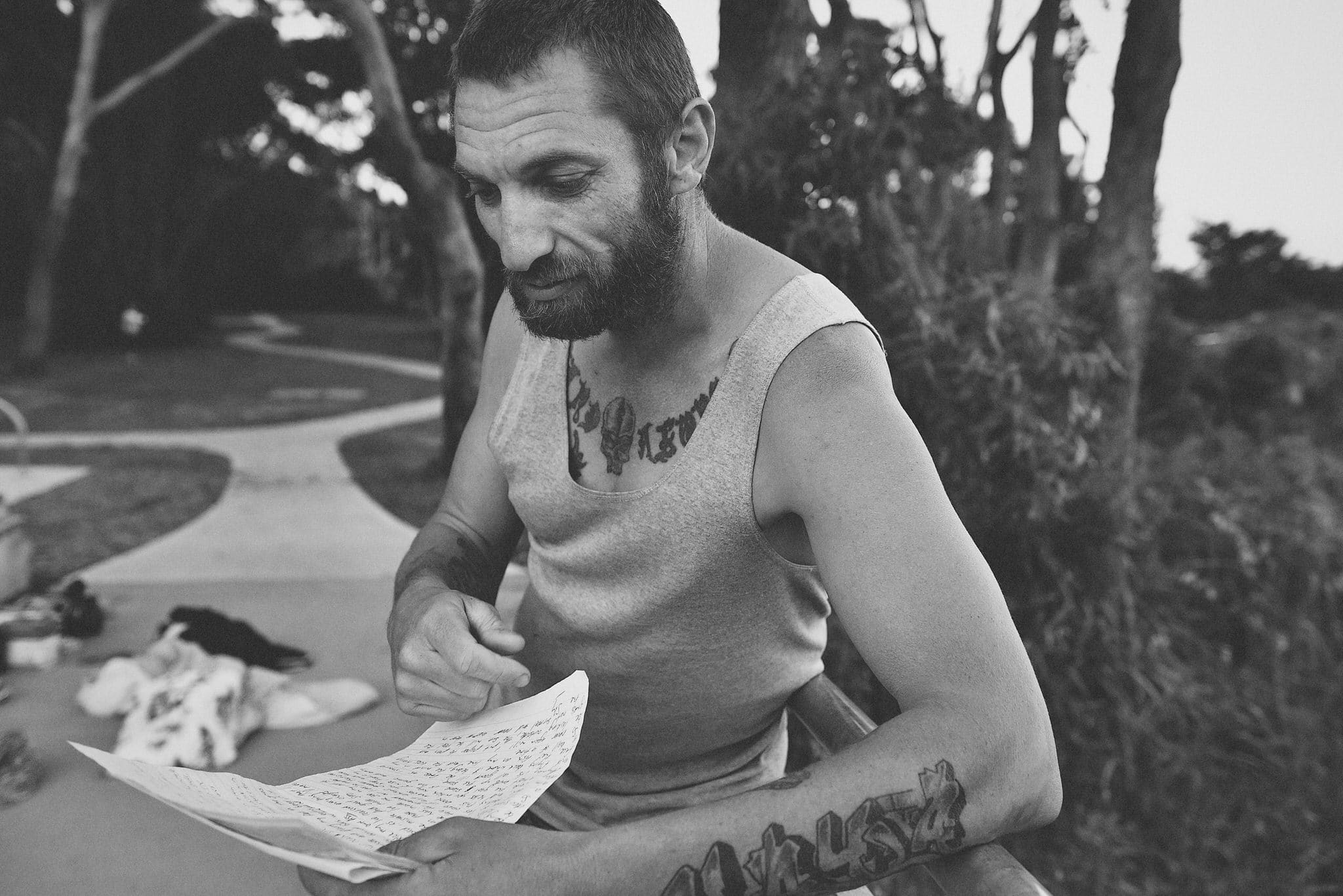 He’s a good man. I hope our paths cross again someday. I’ll be keeping a look out for his book of poetry too and happily buy a copy when I see it.